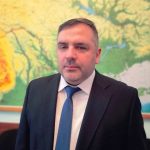 In 1995 he graduated from the Taras Shevchenko National University of Kyiv on the specialty – land hydrology and obtained the qualification as a hydrologist-hydrochemist. He completed his postgraduate studies at the aforementioned university and in 2001 received a PhD in Geography. During the period 1997-2014 he worked at various positions in the State Water Resources Agency of Ukraine.

He is a civil servant of the Second Order. In 2006 he was awarded with the Diploma of the Cabinet of Ministers of Ukraine.

His main activity is the development of legislative and regulatory acts in the field of water management, improvement of integrated water management based on the basin principle, monitoring of water quality, scientific substantiation of measures to protect against the harmful effects of water.

He is an author and co-author of more than 30 scientific papers. He graduated from Kherson State Agrarian University (2002) on the specialty  – hydraulic engineer. From 2002 to 2003 he worked as a researcher in the Irrigated Agriculture Department of the Institute of Southern Vegetables and Melons Production of UAAS (Gola Prystan, Kherson region).

In 2004-2006 he became a full-time postgraduate student of IWPLR. From January 2007 to June 2011 he headed the Micro Irrigation Laboratory of IWPLR. Since July 2011 he has been the Deputy Director of the Institute for Scientific Work. The main area of his scientific activity is research and scientific substantiation of drip irrigation parameters for cultivated crops, in particular the study of the water-nutrient regime of soils, the patterns of water consumption and the formation of moistening zones.

He is an author and co-author of more than 350 scientific publications. IDs and and profiles: Google Scholar